by cube48
Dear fellow SunVoxians, here's the little sneak peek of a project I've been working on for a couple of days now.

Let me introduce you the SunVox powered Raspberry Pi 2 standalone synthesizer. The idea was to have dedicated machine/box with SunVox including some knobs. Like a real synth. This vision was maturing in my head for some time but the trigger were NightRadio's comments about upcoming MIDI CC support in 1.9 before the beta was released. I've collected all the building blocks but I was still missing the enclosure. For some time I was designing a custom made 'ponoko' box to be laser-cut. But then I got too impatient and searched through available stuff at home. A wine box for the win 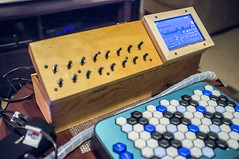 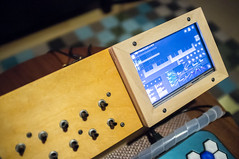 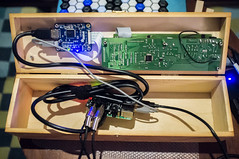 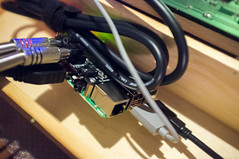 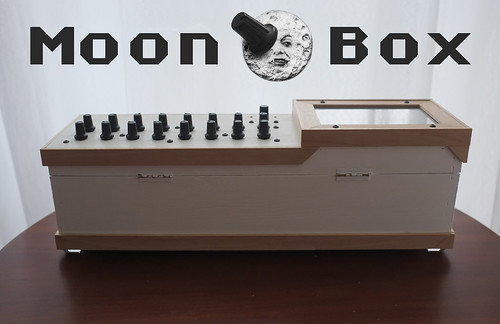 The synth is so far consisting of these bits:

Further improvements are still on the todo list:
* jack outputs for L, R and headphones mounted to the rear side of the box
* 5-DIN MIDI I/O connectors on the rear side - realized via USB<>MIDI cable
* some USB ports exposed on the rear side - mounting small USB hub
* power switch + connector on the rear side
* HW volume encoder for PiDAC+ on the top side
* main out GPIO LED volume indicators (this is optional)
* final paint and design tuning

A few notes to the design. RasPi needs to be powered with 2000 mAh adapter to feed all the peripherals. PiDAC+ gives you really powerful and clean sound, also for hungrier headphones. RasPi 2 with stock Raspbian OS with ALSA (no realtime kernel, no JACKD, no performance tweaks except disabled CPU power-saving) is able to play decent SunVox synths with 11ms latency without compromising the sound - not ideal but already playable. Lowering the buffer to 5ms introduces occasional noise cracks. I'll try to play with the OS tweaks later but I might stick to ALSA as it is supported by PiDAC+ volume encoder routine. Display is connected via HDMI and USB cables (I'm waiting for shorter and flat HDMI cable). HDMI delivers the image, USB powers the display and touch board. UC16 MIDI controller is connected also via USB (not on the photos above). The only connection hack will be soldering wires to PiDAC+ so I get the normal jack connectors. Current cinch connectors are fine but the placement is not ideal. I want to keep all the 'internal' connections inside the box and expose only the stuff that has to interface outer world and if I would expose the cinch through the rear side, also the HDMI cable would stick out and then coming back which is not desired. The front panel will need some locking or support mechanism, ideally in various angles. The whole thing reminds the Roland's 'Plug-Out' system. You prepare the synth/composition/patch on PC/tablet/phone and then load it to the box if you don't want to mess around with the small screen. But it's actually nicely usable in the box as well as you all know from your own SunVox-on-phone experience. Sun bless Alex for his perfect and scalable UI. RasPi is configured to boot and load up the SunVox automatically, opening the last session. Like a real synth

Do you guys have any cool name ideas for the synth? Right now I call it simply SunSynth but that's too obvious. Some link to the SunVox would be cool but maybe something more esoteric

Alex, THANK YOU for such a great piece of software! Btw, I hope you don't mind if I put the SunVox logo on the box when it's finished?

by NightRadio
Wow! So cool!
Thank you man!

Btw, I hope you don't mind if I put the SunVox logo on the box when it's finished?

by iaon
This is great, especially with the touchscreen.

by cube48
Thanks guys for your responses.

I like that one. It's straight to the point

by samrai katt kovboy
Cube48 is it okay if I repost your post on my website musicalandroid.com?

I've played more yesterday with the SunBox (while waiting for other components to come) and I can't praise PiDAC+ enough. If you are serious about the sound on Raspberry Pi, this is a must. It sounds really good with SunVox. Maybe it's not as smooth as RME UCX with full power laptop and desktop SunVox version but still it still feels like a serious synthesizer. I wouldn't hesitate to use it as a live instrument. PiDAC+ cinch outs are unbalanced yet I got no noise when connected directly to the active monitors with cca 1,5 m cables. And the headphones (Beyerdynamics DT 880 Pro) are fed properly too. I even had to lower the master ALSA volume to keep the loudness on bearable working level.

by sarah_hankins
Incredible! Cube48, is this a build you might take orders for once you're satisfied with yours? Or perhaps "consult for hire" for somebody who's interested in building their own but needs guidance? I'm looking for a modular synth as a gift for my boyfriend (yes he's a lucky man), but, sadly, the boutique eurorack rigs in burled walnut cabinets that I'm drooling over are just way outside my budget at this stage. Whereas your awesome SunVox rig has pretty much everything I'm looking for ... less of a learning curve since we're already familiar with the software, plus the haptic experience of a "real" analog (knobs, dedicated casement), plus the potential for customization (in terms of design, plus a simple enough hardware setup that we could tweak or expand it down the line.) I would LOVE to be in touch further with you about buying or making my own, if you're open to such things.
Cheers,
Sarah

by cube48
Thanks Sarah. Unfortunatelly I wouldn't manage time-wise to build another unit in the near future. I was just lucky to spend 3 weeks home alone - kids and wife left for a holiday to the grandparents. So so enough time to get the box more or less finished. Of course it would take less time and effort on the second run. Anyway, I'm open to any questions concerning the build. We are the SunVox community afterall. I don't know if I find the time in the near future (family is coming back) but I want to write down more detailed guide for others. In fact to put the core of the machine together isn't that difficult. Finding the right case and a solving all the design details is another story.

Here is a very brief and raw summary of the steps. Sure they are breaking into smaller sub steps but it might direct you a bit.

1. get the Raspberry Pi 2 + 2000 mAh power adapter
2. get the IQ Audio Pi-DAC+ and mount it to the Raspberry Pi - IQ Audio's documentation is good - the only thing that was missing was the headphones pin out but the guy behind IQ Audio send it kindly to me on request
3. get the MicroSD card - 16GB+ if you want to store samples
4. download IQ Audio image of Raspian OS - good for lower latency, even with ALSA it's faster than official Raspberry Pi distribution, 5ms and no buffer overruns with standard compositions/patches
5. flash the image to the MicroSD card
6. test it with your HDMI enabled screen/TV/monitor
7. hook up the USB MIDI controller of your choice - I can see the AKAI Nano Control as a good contender for this project - small, light, affordable, expendable if something goes wrong although I don't have own experience of the feel and quality
8. get the touchscreen + converter + flat cable from Adafruit - they do 7" too, I'm happy with 5", you'll need to configure Raspberry but it's all documented on the Adafruit's page
9. find the apropriate housing or design your own - old cases of all kinds are just calling for this project, yet this is the hardest part of the - I had an old Atari ST case as a backup plan, I could've even fit the typing keyboard with touchpad in there but that would divert from the original 'synth box' intention
10. find the way to fit everything together - OK, this is maybe even harder than the previous step - you have no Idea how much time I've spent just by visualising details in my head

It also depends on how many features you would like to have. Make a list of it and then think of the look of it.

I'll add the latest pics tomorrow (it's too dark to shoot pics now). The box is finally like 98% finished. I hope I'll be able to shoot some video demo too.

by sarah_hankins
Thanks cube. After I posted and thought it over some more, and looked at other diy synthy projects, I actually got really psyched about building something like this myself. So many thanks for the basic step-by-step! Do you know how you'll be cc mapping your pots to parameters? Would they be fixed to things like frequency, mod, filters etc (not sure if/how that's possible), or there to be re-mapped with each new project?

Can't wait to see your pictures

by cube48
Ctrl+click the image below to open a flickr gallery in a new tab.

I'm toying with the name MoonBox now. Like a little celestial brother to Sun and I also have a funny logo in my head. 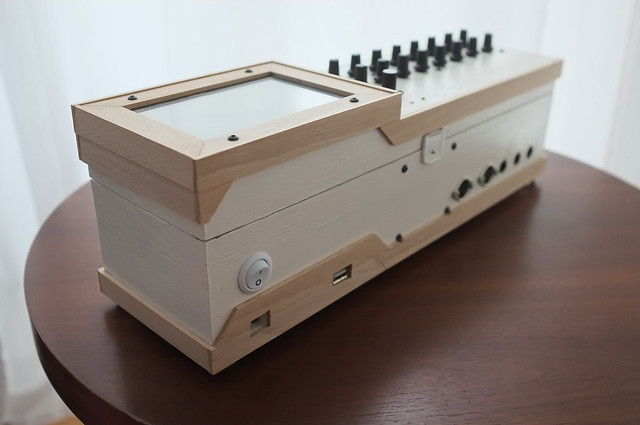 by sarah_hankins
Holy crap it's gorgeous. Congratulations! Did you keep the front panel locking situation, so that you can use it up at an angle, classic analog synth style? Also, if I may ask, what have you mapped your pots to?

by transient
Wow wow wow! That is looking absolutely gorgeous! Congrats on the fantastic build!
All times are UTC+05:00
Page 1 of 2
Powered by phpBB® Forum Software © phpBB Limited
https://www.phpbb.com/