by NightRadio
With MetaModule you can create your own complex modules and save them in the .sunsynth file format.
MetaModule is a full-featured copy of SunVox in a single module. So you can include one SunVox-project into another recursively. Some complex synth or effect (with large amount of the modules) may be hidden in the MetaModule. You also can use it as arpeggiator. 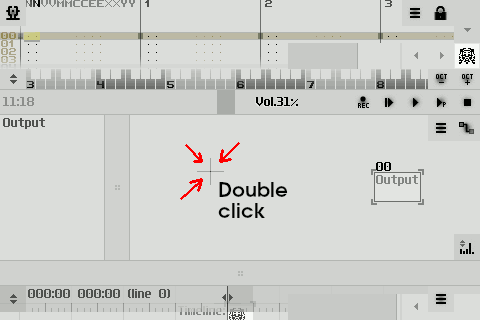 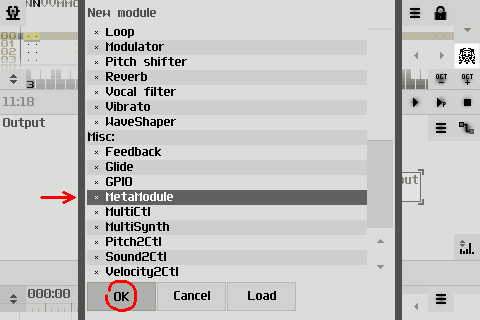 2) Press EDIT (under the MetaModule controllers): 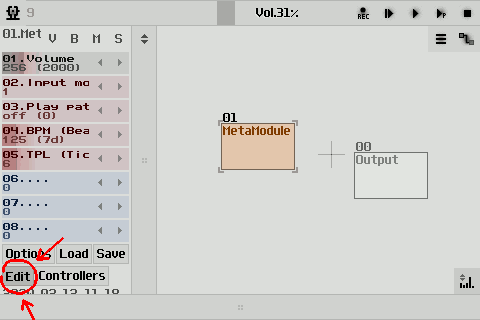 3) The internal project editor of MetaModule will open: 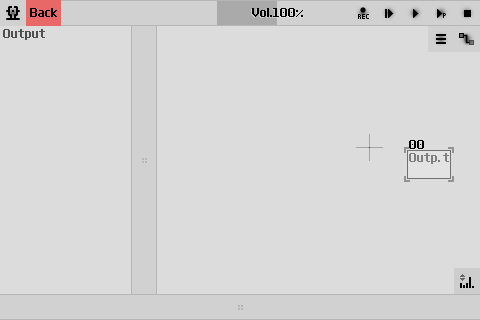 4) Add some generators or/and effects. Test it. Press BACK: 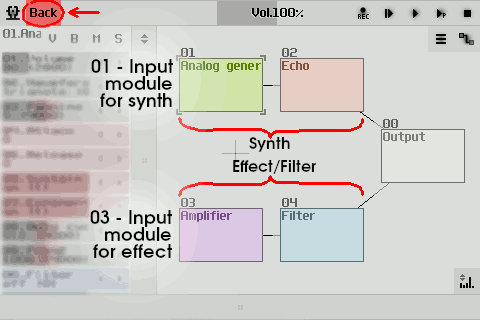 Instead of steps 1-4, you can also do the following:
Module view -> Menu -> Load -> select some sunvox file -> the MetaModule (with the loaded project inside) will be created automatically.

5) Now you can use it as a synth if controller 02.Input module points to the input module of the synth (inside MetaModule): 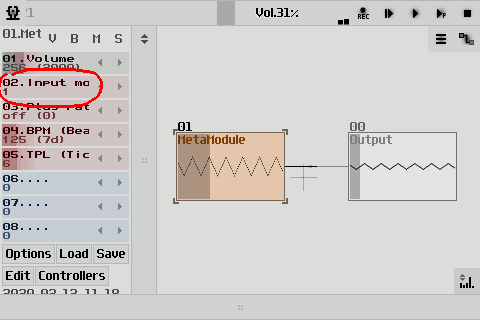 6) Or you can use it as an effect if controller 02.Input module points to the input module of the effect (inside MetaModule): 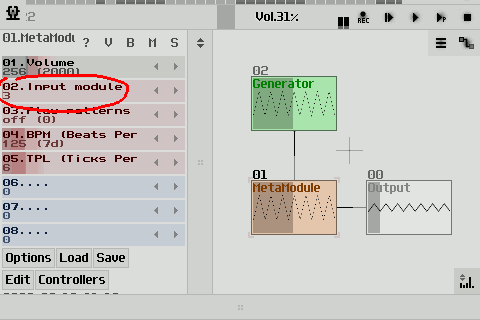 7) Save this MetaModule to the .sunsynth file. And that's it. Now you can use it in other projects: 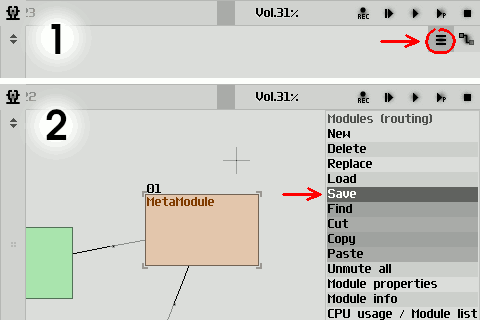 by SolarLune
Thanks for that little tutorial, NightRadio. I was wondering, is there a way to trigger the MetaModule without actually playing a note from the source sunvox file? Or will it only play if it gets a note input?

by NightRadio
It plays when a note received only. No other ways in current version :)

by geckojsc
Maybe we should have a sub-forum for MetaModule instruments, beside the competitions forum?

by SolarLune
I think that might be a good idea. Or, we could just post our instruments in the Instruments section, but that wouldn't be very easy to maintain. Maybe with the sub-forum, each person can make a single, constantly updated thread for their instruments (so that it's easy to find instruments from each person)?

by geckojsc
Yeah, that's what I was thinking - that way each MetaModule released could get its own description, feedback, and news regarding updates, etc. And it would be easy to find them for newcomers too.

by offthesky
hi there, thanks for posting this tutorial. btw, i can get the metamodule to work as an instrument no problem, but i've been trying to get the metamodule to also work simply as an effect... but with no such luck. the child .sunvox i've loaded into my metamodule simply has an echo effect in it, which i've set as the input of the parent metamodule. i've set the metamodule to play(param 3) and everything but when i play sounds through it, nothing goes through. am i missing a step?

Solved: after a bit of further experimentation, i think i figured it out - you have to set the input module to the "1st" module in the chain... it won't work if you set the input module to like the second or 3rd effect in the chain(of the child .sunvox project you're loading into the metamodule)... i had a generator running to the echo effect(making the echo effect the 2nd in the chain) which is why it didn't work... once i deleted the generator, it seemed to work okay as an effect... hope that helps others out there who might also run into this problem...

by marlow77
Hello all,

I am trying to figure out how to use some standard effects as modulation sources for the metamodules.

If I attach a synth module before the filter I am good to go on using it as a metamodule.

METAMODULE (SYNTH -->FILTER with automation) -->OUT (This works!)

However I want to choose other synths to attach to this filter outside of the metamodule.

SYNTH MODULE-->METAMODULE (FILTER with automation only) -->OUT (This doesn't work.

Am I doing something wrong? I started the sub-song and attached to the only effect module in the metamodule (the filter effect module). Can it work this way? it would be so awesome to be able to automate the effects this way in the metamodules. Essentially, this could create limitless envelopes for tweaking input.

I dream of being able to either pitch the metamodule from an external synth (an arpeggio type of pitch system) or be able to use sample offset automation with live input... How cool would that be? Regardless, I am having lots of fun experimenting and Sunvox is such a beautiful engine in sight and sound.

by NightRadio
Marlow,
please check this example.
The scheme is: Generator -> Metamodule (Filter with automation pattern) -> OUT.
Key points:

by marlow77
Thanks, NightRadio! So exciting!!!

Is there a way to pitch a metamodule with a generator that I don't know about??

Seriously great stuff! I am going to making some metamodules to share. Planning on hyper-randomized goodness!

Is there a way to pitch a metamodule with a generator that I don't know about??

by Darkhog
NR, please stick it, so when we have over 9000 metamodules instructions how to make one won't get lost.

Re: What is MetaModule--user-defined controls

by ccchips
Maybe a dumb question, but what are "user-defined" controls, and how do I define them?

by gilzad
Since a MetaModule can consist of several Generators and DSPs, you might want to offer access to some of their controllers.

You can rename the user defined controller by changing the text above the 'Close' button of the Controller-dialog.

I hope this helped.
All times are UTC+05:00
Page 1 of 2
Powered by phpBB® Forum Software © phpBB Limited
https://www.phpbb.com/